The 1st ever bug

In 1946, the 1st ever case of a bug was reported when an actual moth trapped in the relay of a Mark II caused it to malfunction. The bug was removed and taped into a log book and recorded as the 1st actual case of a bug being found! The log book (with attached moth) is on display at the Smithsonian National Museum of American History. How’s that for error tracking!


The term bug however was coined earlier as records show that Thomas Edison used it in 1878:

“It has been just so in all of my inventions. The first step is an intuition, and comes with a burst, then difficulties arise—this thing gives out and [it is] then that 'Bugs' — as such little faults and difficulties are called—show themselves and months of intense watching, study and labor are requisite before commercial success or failure is certainly reached.” 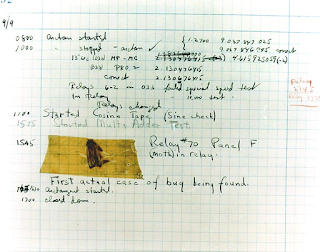 Adapted from: Refactor your wetware @ Agile2011