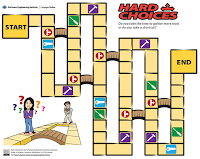 At the April DC Scrum User Group meeting, I presented the technical debt simulation game "Hard Choice". The game was developed by the Software Engineering Institute to help players understand the impacts of technical debt. Players need to balance investing effort to gain an advantage or paying a price to take shortcuts.

The game is a board game and the goal is to accumulate as many points as possible. Players accumulate points by finishing before others and by collecting tool cards. Along the way players can take shortcuts by crossing bridges. After crossing a bridge, players are penalized on each subsequent roll of the dice. To get rid of the penalty, players need to skip a turn. The games generated a lot of good discussion afterwards. Some of the comments were:

1. Taking debt late was better than taking it on early. But it got worse in the second round.
2. Not all debt was the same. Some bridges were better shortcuts than others
3. Knowing were others were on the board impacted the decision of whether to take a short cut or not
4. After taking a couple of short cuts we were barely moving
5. Not taking shortcuts made me loose!
6. I finished 1st but did not win

Overall, the game was fun and well designed. The discussion afterwards was very insightful.